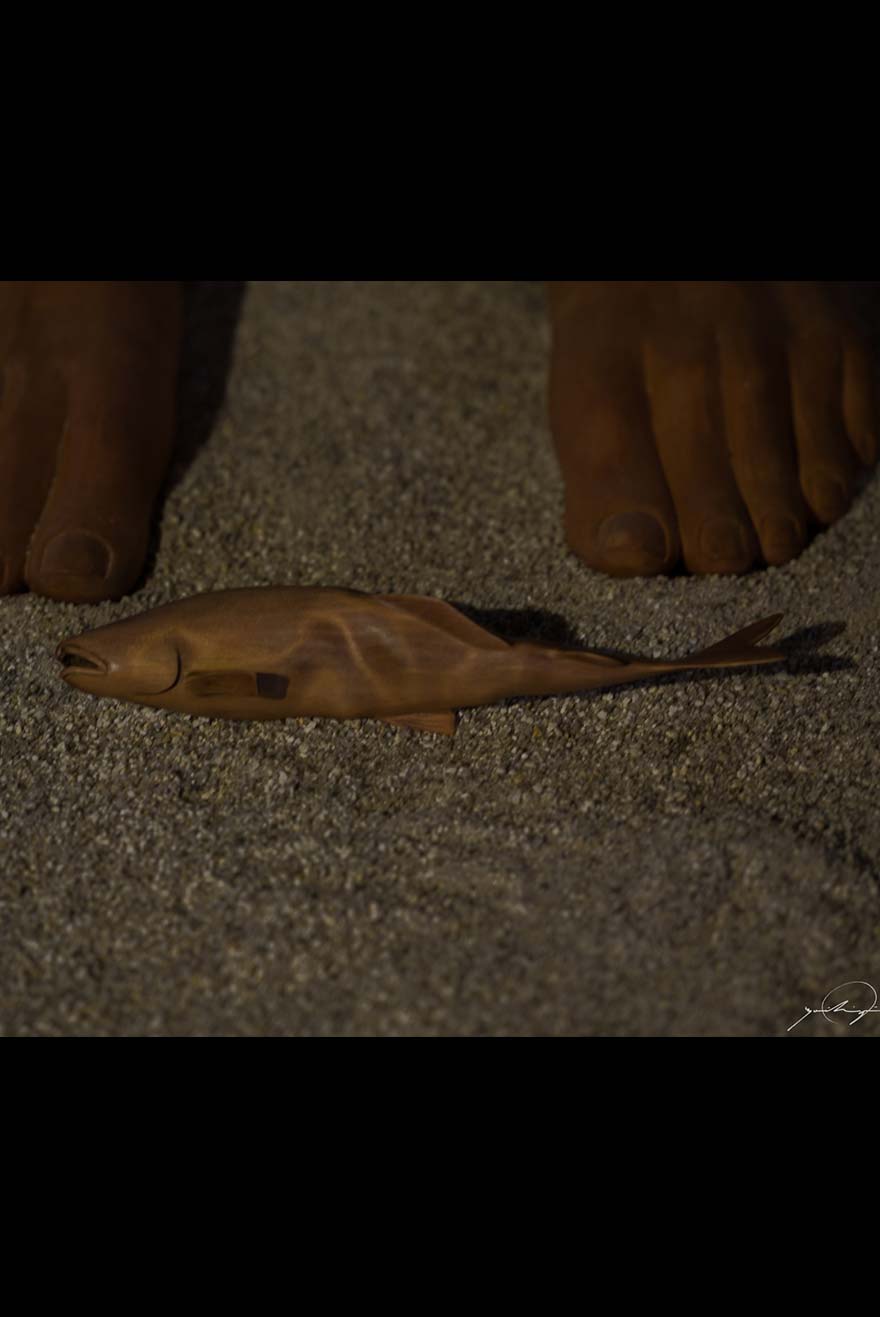 These works were produced in collaboration with Shinjiro Ito, a woodworker of Hida Takayama who is highly skilled in his craft. The model was cut out from a block of wood using 3D data produced by the artists with the support of Karimoku Furniture Co.
The silver sculptures floating in the air transform the landscape, bringing space back into a musicallike cycle. Ochiai has created many such works. The artist’ s orientation toward a digital nature in which mass and non-mass developed from the relationship between waves, mass, and intelligence, as well as the transformation of images and mass largely seem to be due to his desire to become one with the landscape and space in the synaesthesia of sound and light.
This work represents the process by which a silver mouth fish, another name for sweetfish in Japanese, is transformed into a three-dimensional wave shape. Living in clear streams and feeding on river algae, the sweetfish has a different taste depending on the conditions of the river it lives in and is a creature that truly expresses the complexity of indigenous rivers. In the Nihon Shoki (The Chronicles of Japan), the sweetfish is said to be the one that Empress Jingu caught with a hook she threw into the river to divine the outcome of a battle (hence the Japanese character for sweetfish can be read as "divination in fish." It is interesting that the same character in Chinese means “catfish” ). If we go back to mythology,
Tenazuchi (arm deity) and Ashinazuchi (leg deity), who seem to be related to the long-limbed and long-legged people, are the parents of the Inadahime deity, who appears in the tale of Susanoo (storm deity). There is a legend that she was conceived by stroking her belly with a sacred stone in response to the oracle of Tsukuyomino-Mikoto (moon deity), who was Susanoo's brother.
The light of the moon shining by the reflection of the sun god Amaterasu resembles the motif of mirrors and water surfaces. With the motif of transforming the landscape, this wood sculpture was born out of a journey blending the context of sweetfish, mythology, mirror, and digital undergoing reincarnation. It is a work cut out using 3D data and brought to life by Mr. Ito's skillfulness, and as a substance that exists between waves and living creatures, it flows in nature with mass.

For inquiries about Transformation Process of Silver Mouse Fish I, please use the form on the Contact page of this site.