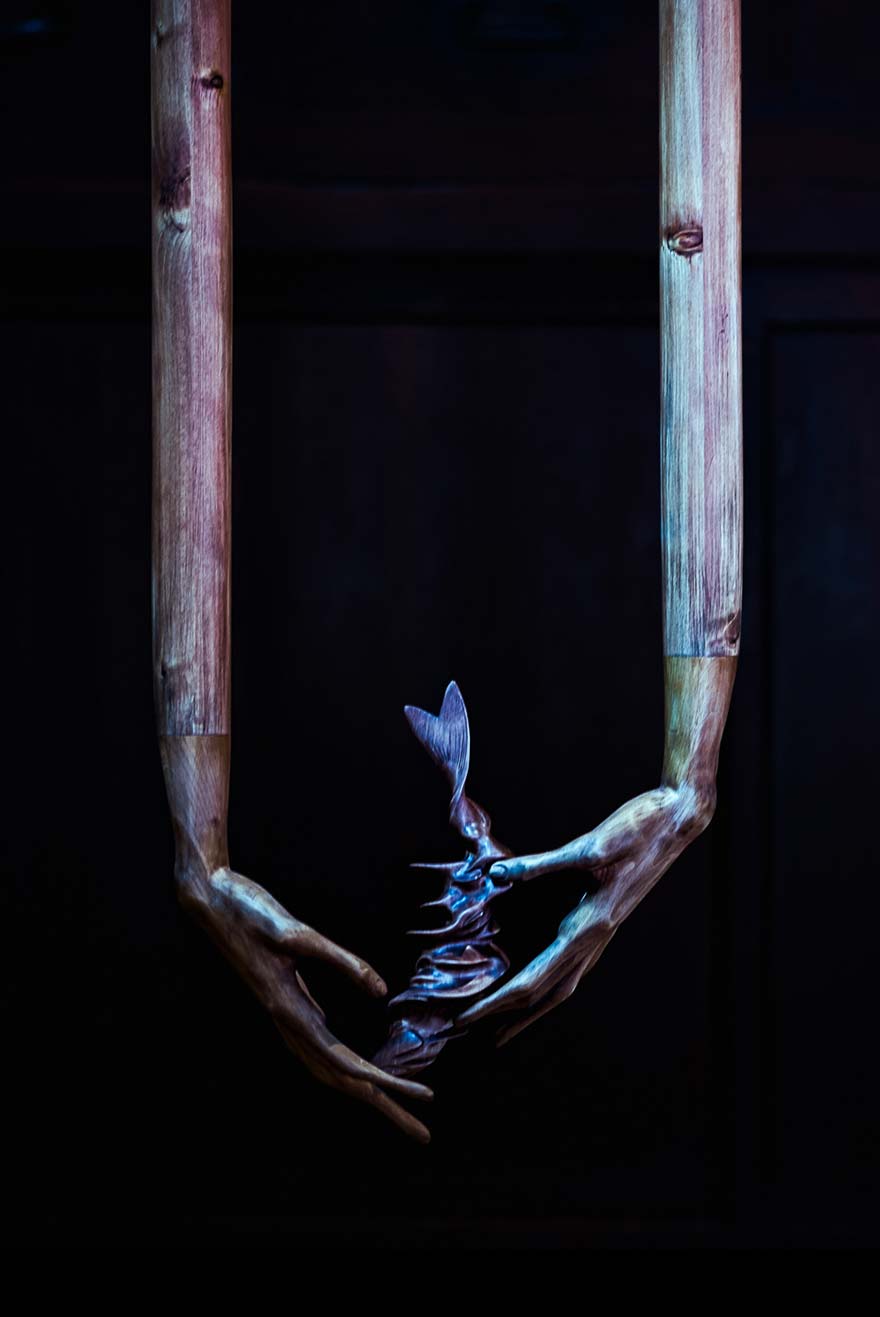 These works were produced in collaboration with Shinjiro Ito, Kyohei Murase, and Hirotoshi Yamauchi, the woodworkers of Hida Takayama who are highly skilled in their craft. The model was cut out from a block of wood using 3D data produced by Ochiai with the support of Karimoku Furniture Co. (Special thanks to Myuna Komurai.) It is said that the Tenaga and Ashinaga figures originated from the Chinese text Shan Hai Jing (Classic of Mountains and Seas) which describes the "longarmed people'' and the "long-legged people," respectively.
Legend has it that long-legged people carried the longarmed people on their backs to catch fish. These figures were introduced to Japan and have been preserved as folklore, taking on various forms, such as Deidarabotchi, the giant yokai (monster), and a yokai which feasts on octopuses. In Japanese mythology, the parents of the Inadahime deity, who is offered to the eight-forked serpent, Yamata-no Orochi, are Tenazuchi (arm deity) and Ashinazuchi (leg deity). The existence of the Tenaga Shrine (long-arm shrine) and Ashinaga Shrine (longleg shrine) in Nagano may also have something to do with the derivation of the Tenaga and Ashinaga forms.
While conducting surveys on the Tenaga and Ashinaga, it occurred to Ochiai that the concept of these figures may express the connection between hunting and gathering, and mountain and forest culture in Japan. Many remains from the Jomon period have been excavated in the central region of Japan, including Hida Takayama and Suwa. As evidenced by the archaeological findings indicating that a rich hunter-gatherer society persisted for more than 10,000 years, there may have been many areas that did not require the shift to agriculture.
Like the Inadahime deity mentioned in the previous section, many of the deities of Japanese mythology are inevitably born out of an agricultural society. Tenazuchi (arm deity) and Ashinazuchi (leg deity) claim to be the children of Oyamatsumi (great mountain deity) and Kayanohime (grass deity), who are, as their names suggest, gods of the mountains, fields and grass. There is also a strong spiritual element in the meaning of the landform in Kuniumi, the ancient mythology on the birth of the nation. In this context, Ochiai believes that the Tenazuchi and Ashinazuchi figures refer to the superhumanity of the Jomon and hunter-gatherer societies and that they depict the human form which adapted to the environment.
The physical qualities of the giants depicted in folklore, with their long arms and long legs, seem to express the will of wanting to move across mountains and the desire to forage, to reach distant trees, fruits, and creatures.
When Ochiai thought about regionality, locality, and folk art, he decided to use Tenazuchi and Ashinazuchi as the main motif as they are a part of Hida’ s culture and figures that evoke awareness of the physical existence.
The spacious traditional wooden structure of the Kusakabe Folk Crafts Museum gives off an abstract sense of space. Ochiai believes this sense is the richness of space. Long arms and feet may stretch out from the large-scale room, and perhaps they will rub your back, or knead a sweetfish and let it float in the air. The arms and feet of today's "stationary nomads" are long, and the digital nature may intersect space and time, transforming and manifesting everything everywhere.

For inquiries about Materialization of Hope, Transformation of Body (Tenaga), please use the form on the Contact page of this site.